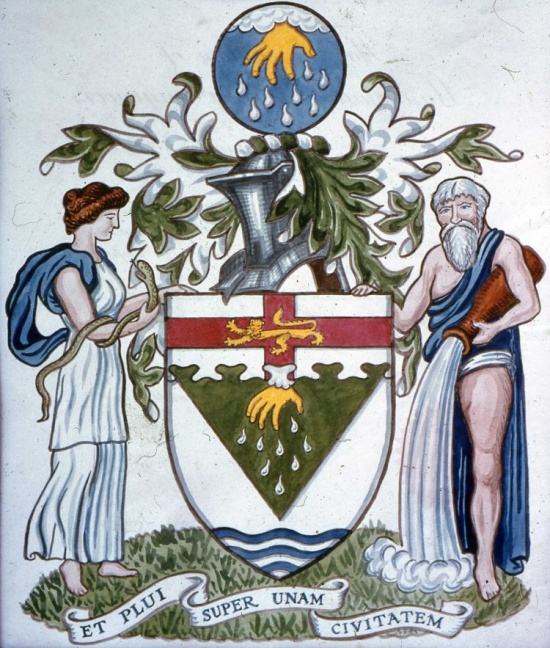 Arms : Argent, on a pile vert a dexter hand Or issuing from a cloud in chief proper and scattering eight guttes d'eau, in base three bars wavy azure; on a chief nebuly of the first a Cross of St. George charged with a Lion of England.
Crest: On a wreath of the colours, A hurt charged with a hand issuing from a cloud and scattering guttes as in the Arms.
Supporters: On the dexter side a figure representing Hygeia vested argent mantled azure, and on the sinister side a figure representing Aquarius habited azure.
Motto: Et plui super unam civitatem.

The first consideration that presented itself in considering the design was that there should be a definite reference to Sir Hugh Myddelton, the Projector of the New River, whose Arms were a pile vert on a field argent charged with three wolves' heads erased of the field. The original arms borne by him were those of the Myddelton family, namely, a bend vert on a field argent, but Sir Hugh changed the bend for the pile in 1622 in memory of the undertaking of the New River.
To provide a substitute for the three wolves' heads, an appropriate piece of symbolism was found in the seal of the New River Company. This seal was cut in 1619 and depicts a Hand issuing out of the clouds throwing down rain upon the City of London. The seal also shows St. John's Gate and Old St. Paul's without the wooden steeple, which was burnt down in 1561 and never re-erected. This hand with rain is seen on the pile as well as in the crest. The eight drops in the crest also refer to the eight former companies merged into the Board.

The London water supply has been under Royal recognition since 1237. The chief thus shows the red cross and lion for England and the King. The chief is nebuly ('cloudy') as a further reference to the clouds and rain. The base represents the rivers and streams that supply water.