From Heraldry of the World
Your site history : Michael Joseph Cohen
Jump to navigation Jump to search 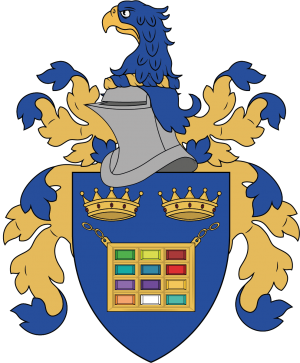 Arms: Azure a Biblical priestly breastplate proper with two chain links on each upper corner Or embellished of twelve precious stones arranged in four rows and in chief two coronets Or.

Crest: On a wreath Azure and Or,an eagle head erased Azure beaked Or.

The two coronets represent the armiger’s hereditary priestly lineage and rabbinical ordination, both metaphorically referred to as crowns in the Talmud (corpus of ancient Jewish wisdom). Moreover, the coronets additionally represent the armiger’s marriage into the family of the legendary King Saul Wahl Katzenellenbogen who was “rex pro tempore” of Poland in 1587. The breastplate further symbolizes the armiger’s priestly status as a direct descendant of the biblical Aaron. Crest: The eagle head, a common Germanic symbol, denotes the armiger's historical ties to Austria from which his family hailed from prior to America.