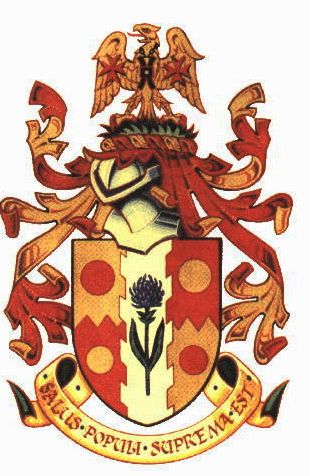 Arms : Quarterly per fess indented Or and Gules on a Pale raguly Argent over all between four Roundels counterchanged a Round-headed Rampion Flower slipped and leaved proper.
Crest : On a Wreath Or and Gules upon a Grassy Mount proper an Eagle displayed Or the underside of each wing charged with a Cross of Malta Gules a Millrind suspended round the neck Sable.
Motto: 'SALUS POPULI SUPREMA EST' - The good of the people comes first

The main charge on the shield is the round headed Rampion, commonly called the Pride of Sussex. The pale symbolises the Mid in the name of the district council. The four quarters and the pale are tightly joined and symbolise the four former districts that now form Mid Sussex. The crest shows a gold Roman Eagle as a reference to the Roman influence in the area for some hundred years. About the neck of the bird is a black mill iron, as a symbol of the historic iron industry of the area. The wings are charged with the cross of the Knights Templar, who, historically, held great estates in the area.

Literature : Image and information provided by the Mid Sussex Council