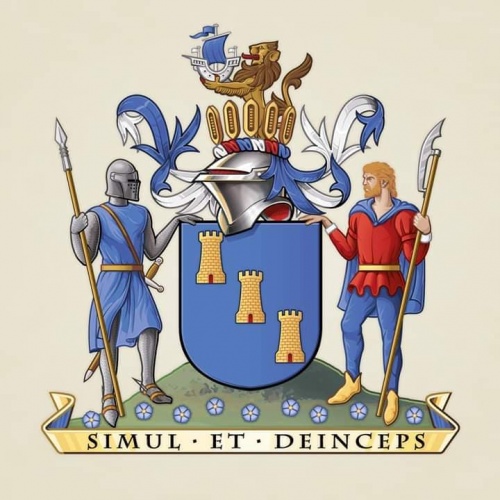 Arms : Azure three Towers palewise in bend Or.
Crest : Within a Circlet composed of eight Shuttles [five of which are visible] palewise Or a demi Lion proper armed and langued Gules holding between the paws a Galley Argent sail set and pennon flying Azure.
Supporters : On the dexter side a Knight vested in Chain Mail and War-Helm proper Surcoat of the colour of flax flowers proper hanging from the waist by a Lanyard a Sword in the exterior hand a Spear also proper and on the sinister side an Irish Kerne or Warrior of the sixteenth century proper vested in a Tunic Gules with Trews Azure and Belt and Brogues of untanned leather proper wearing a Cloak fastened at the neck of the colour of flax flowers proper and supporting with the exterior hand a Halbert [also proper].
Motto: Simul et deinceps

The arms were officially granted in December 2018

The shield is derived from the arms of the former borough of Ballymena, while the crest is largely derived from Carrickfergus, with shuttles and ship elements from the former Larne borough.

A knight stands to the left of the crest and an Irish warrior to the right. Both featured in the arms of the Carrickfergus borough. Slemish Mountain can be seen in the background and flax flowers in the foreground.

A wreath represents the coming together of three boroughs.

The motto ‘SIMUL ET DEINCEPS’, means ‘together and forwards’.