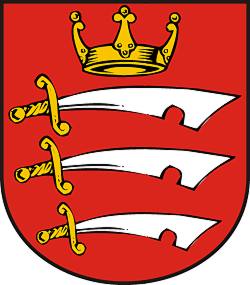 Gules three Seaxes fessewise in pale proper pommelled and hilted Or points to the sinister and cutting edge upwards in chief a Saxon Crown of the last.

The arms were officially granted on November 7, 1910.

The arms are based on the traditional arms of the Kingdom of the East and Middle Saxons, as used by Essex County Council. In the case of Middlesex, a Saxon crown was added at the time of the grant.