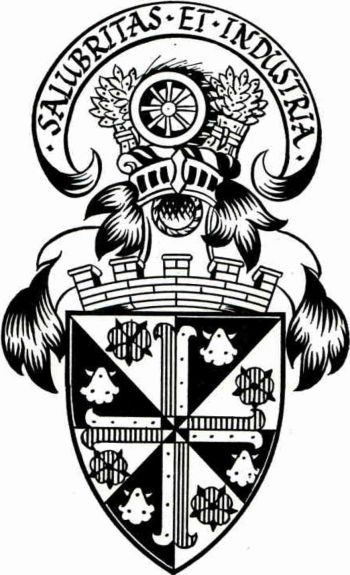 Gyronny of eight Argent and Sable, charged with four roses Gules, barbed and seeded Proper, and as many escallops alternately Or, over all a cross moline square pierced of the field and divided per cross of the Third and the Last.

Above the Shield is placed a mural coronet, thereon a Helmet of befitting degree with a Mantling Sable doubled Argent, and on a Wreath of their Liveries is set for Crest a mill water-wheel Proper between two garbs Or, and in an Escrol over the same this Motto "Salubritas et Industria".

The red roses on their silver field recall the Earls of Lennox to whom the lands of Milngavie belonged before they passed to the Grahams, later Earls and Dukes of Montrose. It was the Grahams who founded Gavie's Mill, and they are recalled by the four golden shells on the black field.

The square-pierced cross-moline represents a mill-rind, since it is somewhat similar in form to the iron fitting set in the netherstone of a mill; in addition, the gyronny background gives a rotatory effect and could easily be taken to refer to the mill-wheel.

The crest of the mill-wheel and the sheaves show that Gavie's Mill was a meal mill and also refer to the agricultural interests of the district.