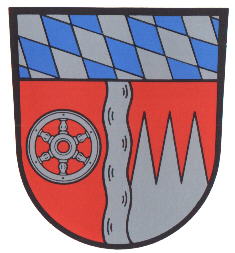 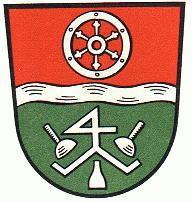 The arms are a combination of the river Main, the wheel of the arms of Mainz and some tools used in the sandstone quarries. The district is situated alongside the river Main and the main industries are the sandstone quarries, agriculture and forestry. The latter two are symbolised by the green colour in the lower part of the arms. A large part of the district was part of the State of Mainz, namely the former Ämter Miltenberg, Amorbach, Klingenberg and Grossheubach.