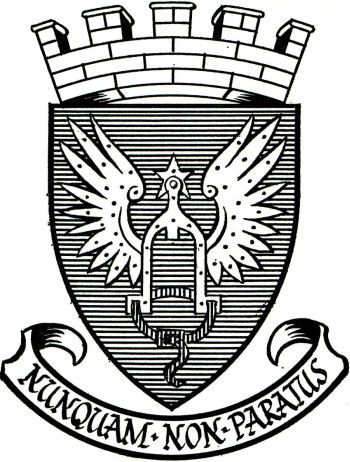 Above the Shield is set a Burghal crown, and in an Escrol under the same this Motto "Nunquam Non Paratus".

The arms repeat the device on the Burgh seal in use in 1892. The gold winged spur with red leathering is the crest of the Earls (later Marquesses) of Annandale, whose arms, surmounted by an Earl's coronet, were on a bell dated 1660 which hung in the turret of the Burgh Courthouse.

The blue field seems to have no special signi­ficance, apart from being a favourite colour for a Scottish town, unless it has some reference to the river Annan on which the town stands.

The Latin motto "Never unprepared" is that of the Marquesses of Annandale. 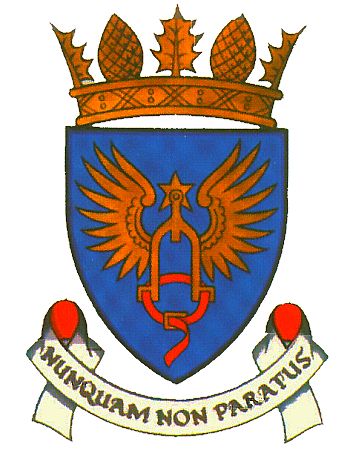 Above the Shield is placed a Coronet appropriate to a statutory Community Council, videlicet:- a circlet richly chased from which are issuant four thistle leaves (one and two halves visible) and four pine cones (two visible) Or, and in an Escrol below the same this Motto "Nunquam Non Paratus".

The arms are the above Burgh arms, but with a different crown.