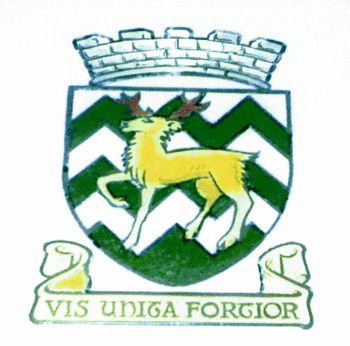 Barry dancetty of six Argent and Vert, a stag trippant Or, attired Gules.

Below the Shield which is ensigned of a Burghal coronet is placed in an Escrol this Motto "Vis Unita Fortior".

The arms follow the design of the Burgh seal. The stag denotes the old hunting forest and the green harry dancetty gives the impression of a background of hills; thus together, they recall that Monifieth may mean "hill of the deer". The stag's antlers have been coloured red in reference to Maule, Earl of Panmure, who was the principal landowner in the district.

The Latin motto "United strength is stronger" comes from the Burgh seal.