From Heraldry of the World
Your site history : Monklands
Jump to navigation Jump to search 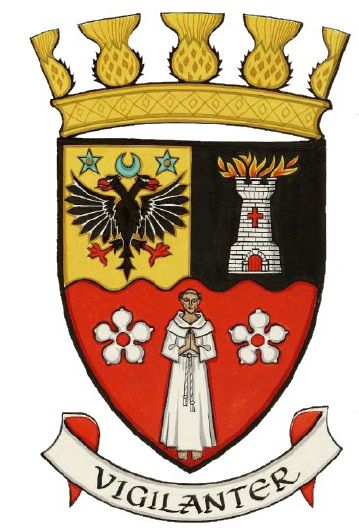 Per fess wavy, in chief per pale Or and Sable, and in base Gules: 1st, a double-headed eagle displayed Sable, beaked and membered Gules, in chief a crescent between two spur rowels Vert; 2nd, a tower Argent masoned Sable, windows and port Gules, from the battlements flames issuant Proper; 3rd, between two cinquefoils Argent pierced of the field the figure of a Cistercian monk affrontee habited Proper.

Above the Shield is placed a coronet appropriate to a statutory District, videlicet:- a circlet richly chased, from which are issuant eight thistle-heads (three and two halves visible) Or; and in an Escrol under the Shield this Motto "Vigilanter".

The arms are based on the arms of the two former burghs and Lanarkshire County Council.

The motto "Vigilanter" (Watchfully) is taken from the arms of Airdire and Lanarkshire.