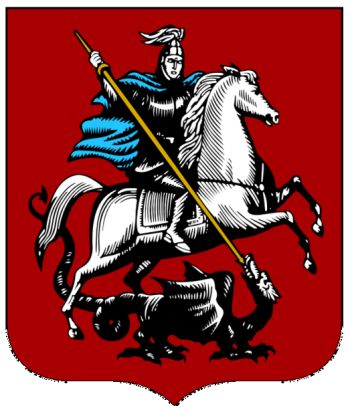 The ancient emblem - which became a coat of arm of Moscow later on - is the mounted warrior, defeating the winged dragon. The first emblems, having much to do with the history of Moscow, appeared soon after the Koulikov Battle (in 1381). These were seals affixed to the state documents. They depicted a mounted knight with a spear or two horsemen riding in the opposite directions. It was not until Ivan III that the image of the horseman defeating a dragon with his spear appeared on the state seals. The horseman symbolised liberation of the Russian lands from the Tatar yoke and formation of the independent Moscow state.

Unfortunately the emblem had to undergo a lot of changes and the horseman was eventually turned into the Saint George. Actually it was due to the foreigners that the warrior was turned into St. George. They did not know the real history, but were familiar with the legend about St. George who conquered the dragon trying to save princess Ai.

The following variation on the arms of the city was send to me by mail.... :

For all arms of the Moscow Districts, see Category:Moscow