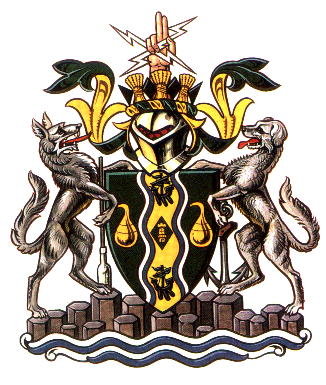 The arms were officially granted on December 22, 1980.

The main tinctures of the shield are green and gold. The green illustrates the fertile farmlands of the area, as well as being a colour usually associated with Ireland. The gold represents both the colour of Irish Whiskey and the sandy beaches of this coastal region, The white and blue wavy edges to the central pale show that water is an important feature of the area. The central device of a Tower on a lozenge refers to Ballycastle, the centre of the area, the main square of which is known as the 'Diamond'. Above and below this are black lymphads or galleys which feature in the arms of the MacDonnells, the chief clan in the Glens of Antrim since the fourteenth century. On either side of the central Pale are stylised stills representing Bushmills distillery, the world's oldest licensed whiskey distillery.

The hand in the crest with the fingers turned down is a tribute to Colonel Boyd who developed the town of Ballycastle in the eighteenth century; the lightning flashes are a reference to Marconi who sent the first wireless messages across water from Ballycastle to Rathlin Island; the alternate black diamonds (coal) and sheaves of corn refer to coal mining and the Lammas Fair (a harvest festival) respectively. The wolf supporter on the dexter is a reference to County Antrim and the wolfhound on the sinister refers to Ireland generally. The glass-blowing pipe and bottle refer to the former glass industry at Ballycastle, while the anchor indicates that the town is a harbour.

The arms are placed on a representation of the Giant's Causeway, a World Heritage site, shown rising out of stylised water.