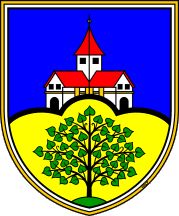 The upper half of the arms shows a church, which is the historical arms of the town. The lower half shows, in a three-topped mountain, a linden tree. The linden tree is derived from the old arms of Rečica.

The historical arms were officially granted on February 21, 1581 by Emperor Rudolf II.

The arms were described as a blue shield with a green hill with thee tops, the middle larger than the other two, with on the middle one a church, with a tower and above each of the smaller hilltops a door and two windows, the tower with two windows and topped with a golden ball, all roofs red. Even though the description is very clear, the arms have been shown differently, with a single tower (not a church tower) on the middle hill and two smaller towers on the other hills.