From Heraldry of the World
Your site history : Nörten-Hardenberg
Jump to navigation Jump to search 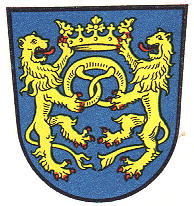 The arms show two lion holding a pretzel. The oldest known seal of the city of Nörten dates from around 1550 and already showed the pretzel. The pretzel probably symbolises the old bakery industry in the city. In the 17th century the crown appeared and in the 18th century the lions were added. The lions are probably derived from the arms of Hannover, as the town was acquired by Hannover in 1692.