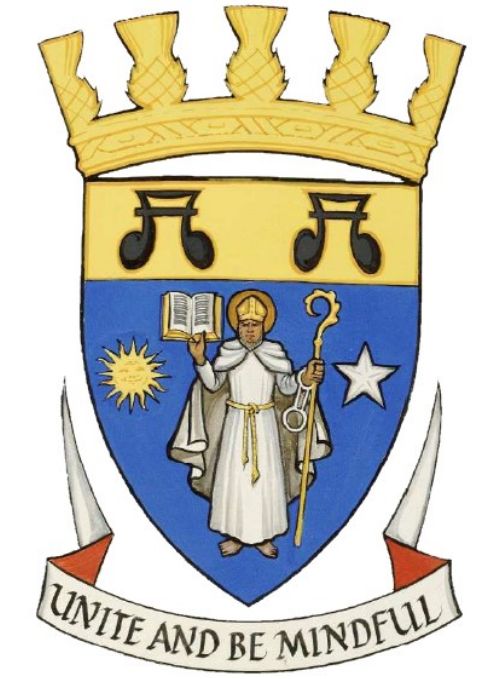 Azure, a figure of Saint Ninian holding in his dexter hand an open book, his crosier in his sinister hand and pendant from the wrist thereof a manacle all Proper, between dexter, a sun radiant Or and sinister, a mullet Argent; on a chief Or, two water budgets Sable.

Above the Shield is placed a coronet appropriate to a statutory District, videlicet:- a circlet richly chased, from which are issuant eight thistle-heads (three and two halves visible) Or; and in an Escrol under the same this Motto "Unite and Be Mindful".

The arms show the figure of St. Ninian, patron saint of Nairn and also part of the Nairn Burgh arms, see below. The chief shows two water budgets, which are taken from the old arms of Nairnshire. The motto is also taken from the arms of the County. 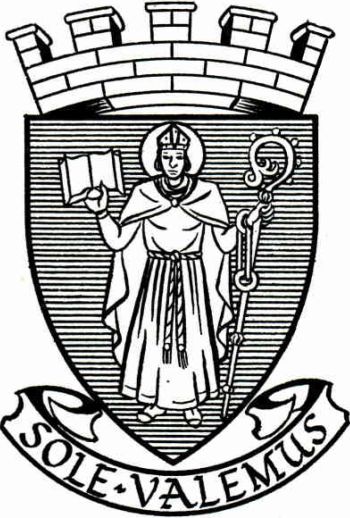 Azure, the figure of Saint Ninian holding in his dexter hand an open book, his crosier in his sinister hand, and pendant from the wrist thereof a manacle all Proper.

Above the Shield is placed a mural coronet and in an Escrol below the same this Motto "Sole Valemus".

The arms show St. Ninian, the patron saint of the Burgh, who appears on the oldest known Burgh seal of which a 1479 impression is on record. The influence of Fearn Abbey, on the opposite side of the Moray Firth, whose first Abbot came from Whithorn, and which possessed some of St. Ninian's relics, led to his adoption as Nairn's patron saint.

The blue field is for the sea, but blue is also a colour associated with St. Ninian.

The Latin motto "We prosper by the sun" was chosen because of the town's very fine sunshine record.