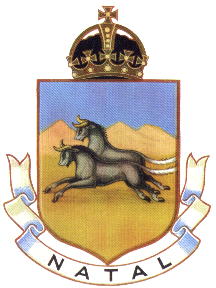 In 1910 the Natal Colony was incorporated into the New South African Republic as the province of Natal. The province received its new arms on 4 May 1911, see below. The two wildebeest were taken from the colonial arms, and no supporters or other augmentations were used, although they were often used with the crown and motto.

As it became common practice to use the crown and motto, the arms were augmented and officially granted on 22 June 1954.

These arms were in use until 1994 when the new provinces were created.