From Heraldry of the World
Your site history : National Arms of Belize
Jump to navigation Jump to search 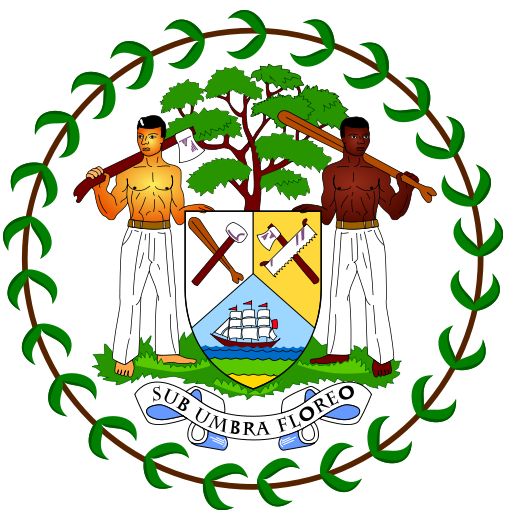 The former colony of British Honduras already received its own arms in 1819. These arms showed in the first field the British flag, the second field shows several tools, used for forestry, the main source of income for the colony. The lower part shows a sailing ship.

In 1907 the arms were changed. Two of the tools were now placed behind the British flag and in both upper fields the tools were crossed. New additions were the wreath with the Mahogany tree, another symbol for forestry, the supporters and motto. The supporters were two native woodworkers, one carrying an axe, the other a paddle. The motto, Sub Umbra Floreo means 'I flourish in the shadows'.

In 1967 the arms were slightly changed; the tree was directly placed on the shield, the British flag was removed as Belize had become semi-independent in 1964. Furthermore, one of the supporters was changed to a Creole. These arms were used until 1981 (total independence) when the present arms were introduced. The only difference is that the arms are now placed on a green base and a larger mahogany tree.