From Heraldry of the World
Your site history : National Arms of Egypt
Jump to navigation Jump to search

NATIONAL COAT OF ARMS OF EGYPT 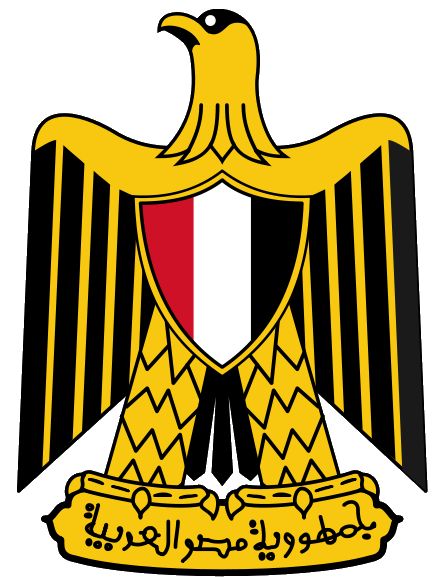 Egypt does not have a proper coat of arms, but uses a State Symbol with the Eagle of Saladin, holding a small shield with the flag on its breast. The eagle stands on a scroll with the name of the country in Arabic.

The Eagle of Saladin appeared as the main symbol of Egypt after the revolution of 1953.

Initially the eagle held a round shield with the previous coat of arms, but in 1958, the shield was replaced by the flag and the name of the country was added to the base. From 1972-84 a non coloured state logo was used.

The first proper use of a coat of arms was in 1914 when the new Sultanate of Egypt under British protection adopted the arms below. The Sultanate was replaced by the independent Kingdom of Egypt in 1922 and the royal arms have been in use until 1953. The arms of the Sultanate and the Kingdom showed the crescent of Islam and three stars.