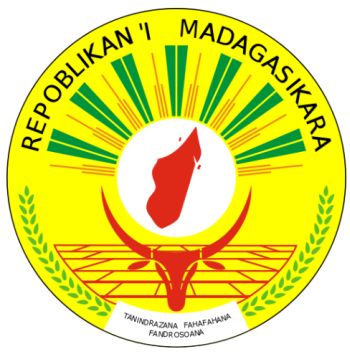 Madagascar does not use any coat of arms, but the above logo.

The logo includes an outline map of the island at the center (together with two smaller islands nearby), and below it the head of a Zebu. It is surrounded by the Malagasy words REPOBLIKAN'I MADAGASIKARA which means "Republic of Madagascar" and at the base TANINDRAZANA - FAHAFAHANA - FANDROSOANA meaning "Fatherland- Liberty - Development".

The motto has changed during the years:

The Merina Kingdom (ca. 1540–1897) was a pre-colonial south-eastern African state that dominated most of what is now Madagascar. The Merina kings and queens who ruled over greater Madagascar in the 19th century were the descendants of a long line of hereditary Merina royalty, stretching back in oral traditions to such sources as the first human inhabitants of the island or the son of god himself.

The Kingdom used the arms below, which were often referred to as the arms of Madagascar, even after the Kingdom became a French protectorate and colony.