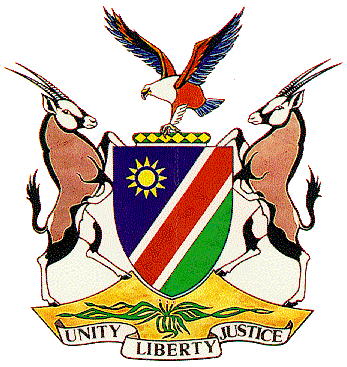 Arms: Tierced per bend sinister, Azure, Argent and Vert, a bend sinister Gules, and in dexter chief a sun with twelve straight rays Or, charged with an annulet Azure.
Crest: Upon a traditional head-ring Vert charged with six lozenges conjoined Or, a Fish Eagle rising, wings elevated and displayed, proper.
Supporters: Two Oryx proper.
Compartment: A Namib sand-dune with a Welwitschia mirabilis in the foreground, proper.
Motto: UNITY LIBERTY JUSTICE