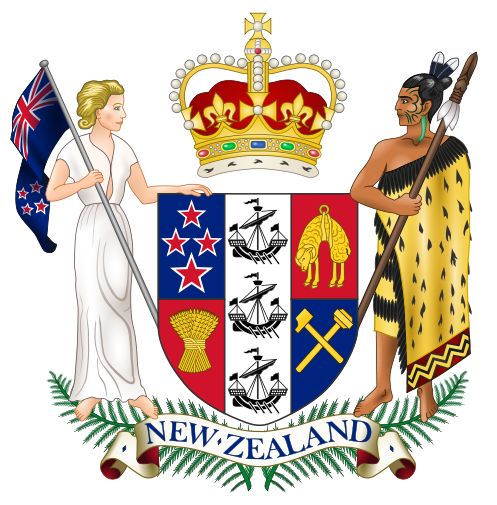 Arms : Quarterly Azure and Gules, on a Pale Argent three Lymphads Sable between in the first Quarter four mullets of the third each surmounted by a Mullet of the second; in the second Quarter a Fleece; in the third a Garb; and in the fourth two Mining Hammers in Saltire all Or. The shield is ensigned by a representation of the Royal Crown proper.
Supporters: On the dexter side a female figure proper, vested Argent, supporting in the dexter hand a flag-staff proper hoisted thereon the Ensign of the Dominion, and on the sinister side a Maori Rangatira vested proper holding in his dexter hand a Taiaha all proper.

The first quarter of the shield depicts four stars as representative of the Southern Cross, then three ships symbolising the importance of New Zealand's sea trade; in the second quarter is a fleece representing the farming industry. The wheat sheaf in the third quarter represents the agricultural industry, whilst the crossed hammers in the fourth quarter represent the mining industry.

The supporters on either side of the shield consist of a Maori Chieftain holding a taiaha (a Maori war weapon) and a European woman holding the New Zealand Ensign.

Surmounting the Arms is the St Edward's Crown which was used in the Coronation ceremony of Her Majesty Queen Elizabeth II.

New Zealand used the British Royal Arms from 1840 until 1911. The colony used a separate seal, showing an English settler and a Maori chief standing opposite each other. This seal was used until 1959, when a new seal was made showing the arms of the country.

Between 1846 and 1852, New Zealand was divided into two provinces, New Ulster and New Munster, each of which had its own seal. These seals were designed in 1848 by English chief engraver, Benjamin Wyon. Both seals featured the Royal Arms and a New Zealand scene. On the New Ulster Seal it was a war canoe with Mount Egmont in the distance, while the New Munster Seal featured a whale boat in pursuit of whales.

In 1852, the provinces of New Ulster and New Munster were abolished and regional provinces were established. Each of these provinces had its own seal, often showing an heraldic design, as can be seen from the seals shown below. I have no idea whther these arms were actually blasoned in colour.

The first recorded move to establish a Coat of Arms for New Zealand was in 1906. Designs were called for a Coat of Arms, however those being considered were destroyed when fire swept through the Old Parliament Buildings in 1907.

The competition was readvertised in 1908 and some 75 designs featuring everything from kiwis, sheep, cows, moas and lions, to stars, ships, British soldiers, Maori warriors and Union Jacks were received. Three entries were sent to England for final judging.

The three winning entries were :

Entry nr 75 was finally chosen to be the new arms for the Dominion. However, the design was “tidied up” before being officially accepted in 1911. Changes included replacing the Maori carvings at the bottom with “more conventional” decoration, and making the Zealandia figure “more demure” and the Maori figure “less challenging”.

Although the Royal Warrant of 1911 gave a description of the New Zealand Coat of Arms, by the mid 1940s it was found that there were at least 20 versions of the design in use. A committee was established to arrange for the redrawing and standardisation of the Arms, and a revised version received The Queen's approval in 1956. The principal alterations were; in the crest (which now is St Edward's Crown to symbolise the fact that The Queen is Queen of New Zealand); the quarterings in the shield which were redrawn; the supporters were redrawn so that they faced inwards instead of to the front with the Maori chieftain losing his hei tiki and gaining a kapeu (a greenstone ear pendant); the scroll was replaced by two fern leaves and the name 'New Zealand' was used in the place of 'onward' so as to give a more direct New Zealand touch.