NATIONAL COAT OF ARMS OF NIGER 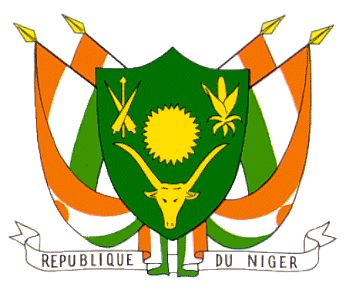 The arms were officially adopted on December 1, 1962 and for the last time described in 1999.

The constitution states that the arms are green with a a sun (for the State), surrounded by two traditional Tuareg swords (for the Tuareg and Haussa people) and symbols for agriculture; three pearl millet stalks and a zebu head.

In practice the green shield is hardly used, as the government uses the official seal, which shows the same elements but in gold on silver, or uses a golden shield with black symbols: