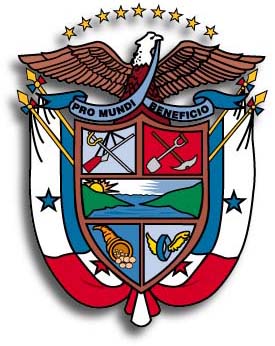 Panama became independent in 1903 and the arms were adopted in the same year.

The upper right quarter shows a crossed sword and gun, symbols of the liberation from Spain and Colombia. The agricultural tools in the upper left quarter symbolise the tools used for making the Panama canal. The canal itself is shown in the middle of the arms. The lower half shows in the right quarter a horn of plenty (cornucopia), symbol of the richness of the country. The left quarter shows a winged wheel, symbol of traffic.

The eagle above the arms is the American eagle, as the USA were the first to recognise Panama as an independent country. The stars above the eagle represent the present nine provinces since 1946. From 1903-1946 there were only seven stars for the then seven provinces, see image below: 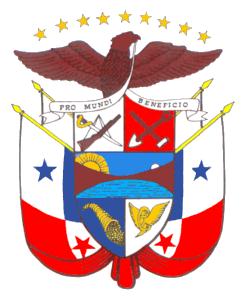