From Heraldry of the World
Your site history : National Arms of South Africa
Jump to navigation Jump to search 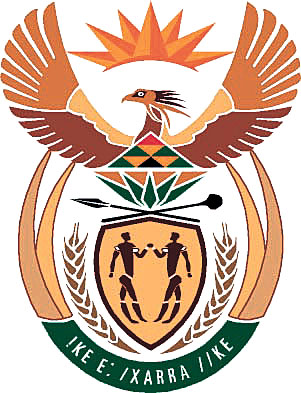 The present arms were officially designed and adopted on April 26, 2000.

The Coat of Arms is a series of elements organized in two distinct circles placed on top of one another. The Motto: !ke e:/xarra//ke, is written in the (now extinct) Khoisan language of the /Xam people and literally means: diverse people unite. It addresses each individual effort to harness the unity between thought and action. On a collective scale it calls for the nation to unite in a common sense of belonging and national pride - Unity in Diversity.

The Elephant Tusks symbolise wisdom, strength, moderation and eternity. The ears of wheat in the circle formed by the tusks symbolise fertility, growth and the development of the potential, the nourishment of people and the agricultural aspects of the earth.
The shield is shaped like a drum and has a dualistic function - the display of fertility and of spiritual defence.
The human figures on the shield are derived from the images of the Linton Stone, a world famous example of South African Rock Art, which is now housed and displayed in the South African Museum in Cape Town. The Khoisan, the oldest known inhabitants of South Africa, testify to our common humanity and heritage as South Africans. The figures are depicted in an attitude of greeting to symbolise unity. This also represents the beginning of the individual's transformation into the greater sense of belonging to the nation and by extension, collective humanity. The spear and knobkierie are dual symbols of defence and authority and also re present the powerful legs of the Secretary Bird. The spear and knobkierie are lying down to symbolise peace.
The protea is an emblem of the beauty of South Africa and the flowering potential of the nation in pursuit of the African Renaissance and also symbolises the holistic integration of forces that grow from the earth, nurtured from above. The Secretary Bird, characterized in flight, is the natural consequence of growth and speed. It is a powerful bird whose legs, depicted as the spear and knobkierie, serve it well in its hunt for snakes symbolizing protection of the nation against its enemies. It is a messenger of the heavens and conducts its grace upon the earth, in this sense it is a symbol of divine majesty. Its uplifted wings are an emblem of the ascendance of the nation, whilst simultaneously offering us its protection. The rising sun is an emblem of brightness and splendour. Its symbolises the promise of the rebirth, the active faculties of reflection, knowledge, good judgment and will-power.It is the symbol of the source of life, of light and the ultimate wholeness of humanity. The completed structure of the of the Coat of Arms combines the lower and higher circles in a symbol of infinity. The path that connects the lower edge of the scroll, through the lines of the tusks, with the horizon above which the sun rises at the top, forms the shape of a cosmic egg from which the Secretary Bird rises. In the symbolic sense this is the implied re-birth of the spirit of South Africa. 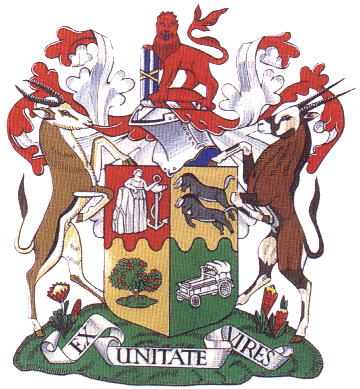 The springbok (to the (viewers) left) is taken from the arms of the Orange River Colony and the oryx supporter comes from the Cape Colony coat of arms. Finally, both the lion with the four sticks bound together, as well as the motto (Unity is Strength) express the concept of unification.

In 1961 C. Pama described the first attempts to create National arms, when in 1827 it was proposed to create the Principality of South Africa, similar to the Principality of Wales. In 1827 the old Dutch administrative system was replaced by the new British system. On April 6 1827 the secretary of the colonial government applied at the Ministry of Colonial Affairs in London for arms of the Cape Colony. He also applies to create the principality, as he argues that the name Cape of Good Hope is rather strange for such a large territory. In the letter he also proposes arms for the new principality.


The new arms shows in silver the red cross of St. George, with a golden anchor on the crosspoint. In the first and fourth quarter he proposes the three British lions and in the second and fourth the Dutch lion, with sword and arrows. He claims that the use of the Dutch lion was to please the many Dutch colonists in the colony.

The proposal, however, came too late in London, the Cape colony seal had already been made, and thus the arms were never registered.