From Heraldry of the World
Your site history : National Arms of Thailand
Jump to navigation Jump to search 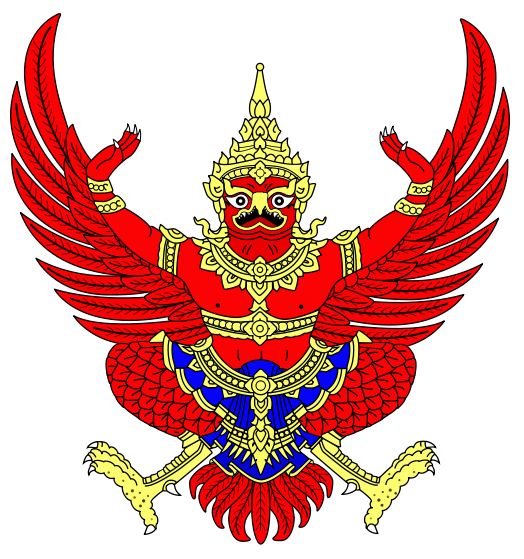 Thailand has no proper arms, but uses the above State symbol, known as the Phra Khrut Pha.

The present state symbol was adopted in 1911 and shows the Guruda ("Krut" in Thai), a mythical half-man half bird being in Hindu mythology. Garuda is believed to be the vehicle of the Hindu God Vishnu. Since ancient time, the Kings of Thailand have traditionally taken the title of Rama, a reincarnation of Vishnu on this world. (King Bhumibol, the present King, is Rama IX) Therefore, the mythical bird of Vishnu has been used as the Royal symbol and later as the national seal and the seal of the government of Thailand.

Thailand shares the belief in Garuda with Indonesia, but the Indonesian Garuda is more realistic and less mythical than the Thai Krut.

Until 1911 the country, then named Siam, had no official arms, but used the Royal Arms, as shown below. 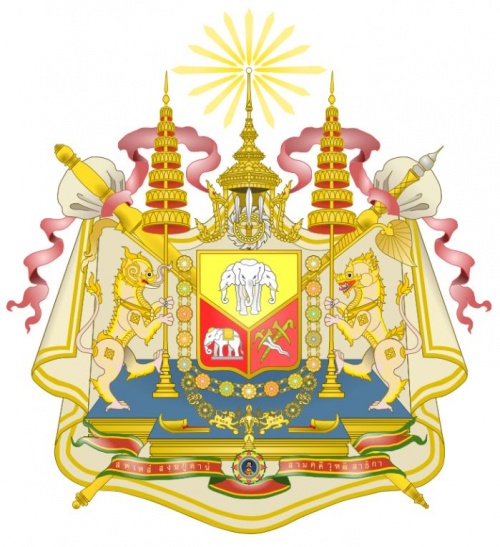 On the top of the coat of arms is the Great Victory Crown of Thailand, the most important royal regalia and the symbol of kingship. Under the crown is the symbol of the Royal House of Chakri, the King's royal family, which is a disc intersected with a trident. The royal multi-tiered umbrellas of state are also present on either side of the crown. To both sides of the coat of arms are the other regalia, the royal sword and the royal baton. In the background is the draped robe - either the Royal robe of the King or the robe of the Order of Chulachomklao - an order created by the King. The supporters are two (again) mythical creatures, one is the Royal Lion, rajasiha, and the other is Elephant Lion, gaja-siha.

The shield itself is partitioned into three parts, signifying the Thai part of the Kingdom (the 3-headed elephant) on the top, the Laotian suzerainty (another elephant), and the Malay suzerainty (two "kris", or Malayan short swords).

The chain under the Arms is a necklace that is a part of the Order of Chulachomklao.

The ribbon under the Arms is inscribed with the motto (in Pali, the language of the Buddhist canon) which may be translated as "Unity brings happiness".

When the present seal (the Garuda) was made the State symbol, King Chulalongkorn's great arms were no longer used as a State symbol, however, it still adorns the hats of Thai police officers to the 1990s.

The arms have been shown on the following collector's items: