National Arms of the Falkland Islands

From Heraldry of the World
Your site history : National Arms of the Falkland Islands
Jump to navigation Jump to search

NATIONAL ARMS OF THE FALKLAND ISLANDS 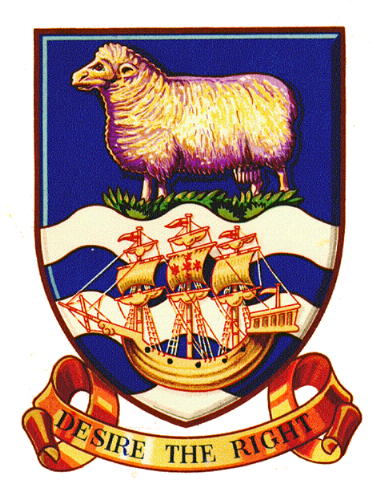 The ship represents the DESIRE, the vessel in which the British sea-captain, John Davis, is reputed to have discovered the Falkland Islands in 1592. The motto "Desire the Right" also refers to the ship's name. The Ram represents sheep-farming, until recently the principal economic activity of the Islands and the tussac grass shows the most notable native vegetation.

The oldest badge of the islands dates from the 1840s. It depicts a ship and a bull. At the time wild cattle were the economic mainstay of the Falklands. It was never an official coat of arms, but was the badge of the seal of the colony.

As cattle were no longer of importance the badge was changed in 1925. The arms show a sea lion as a typical indigenous sea mammal. The ship is again the Desire. These arms are still used as the badge of the Falkland Islands Defence Force. 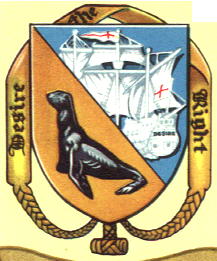 Below the official seal of the Falkland Islands under the reign of King Edward VII: 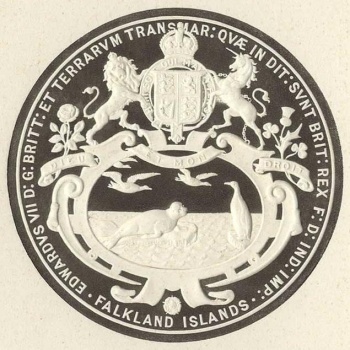 Use of the arms:

Argentina does not recognise the English rule on the islands and considers them part of Argentina as the Islas Malvinas. During the years several Argentine proposals have been made for arms of the islands. Obviously, none of these have actually been used on the islands.

In 1966 the 'National Institute of Falklands and Adjacencies' organised a contest to design arms for the islands. The arms below were declared winner, but the arms were not officially used by the institute:

These arms are explained as follows: The entire upper half is occupied by the Argentine flag, a fact that shows us that the lower Atlantic section is obviously under Argentine jurisdiction (sic). In this lower section, two silver dolphins appear, submerged and aggressive, with their heads down, occupying the upper external and internal corners of the center and right and left corners of the tip, while their bodies, partly approximate, ascend to finish off in its caudal fins without reaching the surface of the sea, leaving enough space between them, occupied by a silver Roman anchor. In addition, three stars in gold appear, with five points each, aesthetically placed, representing the adjacent archipelagos: Georgias, Sandwich and Órcadas del Sur. Outside of the field, a wreath of laurel (right) and olive (left), tied by a ribbon bow with the colors of the Fatherland.

These arms, although not legally approved, have been seen in Argentine publications during the years until present time.

Two other entries from 1966 that have been used/shown during the years :

In 1969 Jorge de Zarazaga-Berenguer proposed different arms in a general heraldry book for the Argentine market:

These arms are explained as follows: The two dolphins signify the command over the sea that Argentina (represented by the sun from the flag) has over its jurisdictional waters (wavy base) where the Malvinas Islands are (...), as well as love for the entire territory of the nation. The chief is composed with the arms of Castile in the first component and those of León in the second, because these islands are part of the territory discovered and civilized by Spain (...). The naval crown that stamps it and the southern cross that goes as the crest alludes to its marine and southern geographical position. The two mermen supporters express the sovereignty and dominion of the nation over its southern waters, as well as its willingness to defend them.