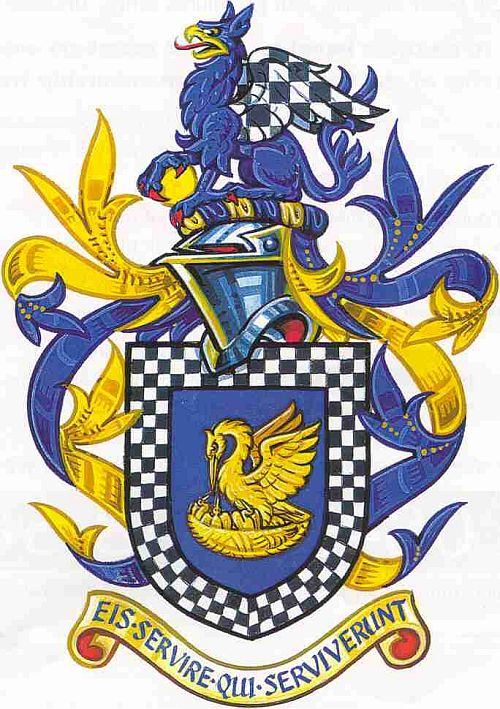 Arms : Azure a Pelican in her Piety Or a Bordure chequy Argent and Sable.
Crest: On a wreath Or and Azure a Griffin sejant Azure wings inverted and addorsed chequy Argent and Sable beaked Or langued and armed Gules resting its dexter forefoot upon a Bezant. Mantled Azure doubled Or.
Motto: Eis Seraire Qui Seraiaerunt.

The arms were officially granted on September 8, 1999.

The shield has, as the main charge, a pelican in her piety surrounded and protected by a bordure chequy black and white as a reference to the dicing on police uniforms. The pelican in the medieval period was believed to peck its own breast until it bled so that its young may be nourished. This became a symbol in art of Christ's sacrifice and, more generally, of benevolence to others.

The crest shows a griffin, traditionally the guardian of treasure, resting a claw on a bezant. The griffin is blue and its wings are in a chequy pattern of black and white, again a reference to the dicing on uniforms.

The motto Eis Seraire Qui Seraiaerunt means 'Of service to those who served'.

Literature : Image send to me by mail