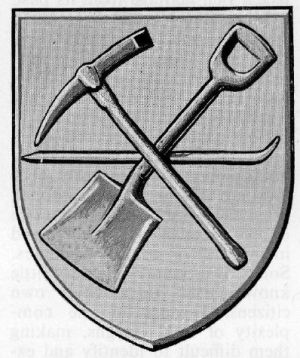 Argent, a pinch bar fessewise, point to the dexter, surmounted by a mattock, head upwards, and a shovel, blade down wards, in saltire, all proper.

The arms were officially granted on November 27, 1948.

The National Federation of Demolition Contractors was formed in 1941 at the instance of the then Ministry of Works, and was incorporated as a company limited by guarantee five years later. The arms were granted in 1948.

The pinch bar, mattock and shovel are the traditional hand-tools of the industry, albeit today's demolition techniques are becoming increasingly sophisticated and we see such modern innovations as the thermic lance. T

No motto was granted in 1948, but the Federation also uses a nonheraldic badge or device with the motto RESURGAM (we shall rise again). This has reference to the fact that demolition is often the first stage in the process of new construction and dates back to the Federation's early days when whole cities had to be cleared and re-built.