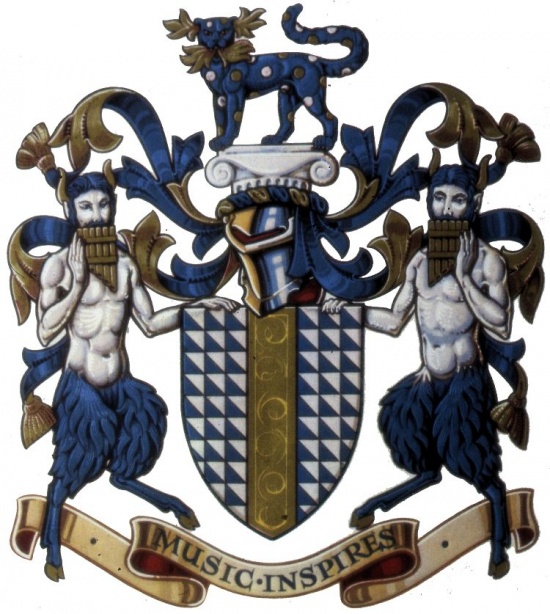 Arms : Chequy each chequer per bend argent and azure over all a pale Or.
Crest: On a wreath Or and azure on the capital of an Ionic column argent a panther statant guardant azure semy of roundels Or and argent and incensed or.
Supporters: On either side a satyr argent crined and with the caprine parts azure armed unguled and playing pipes Or.
Motto: Music Inspires

The tinctures, gold, white and blue are essentially ethereal and therefore appropriate for the medium of music. The interlocking triangles allude to the many member organisations of the Council and at the same time represent the foundation of musical theory by Pythagoras. The pale represents the golden sound track.

The Ionic capital alludes to the foundation of Western European culture as a whole in ancient Greece, while the panther is noted in some of the bestiaries for its lofty, sweet-sounding music. This perhaps derives from its purring...

The supporters and motto are appropriate for music.