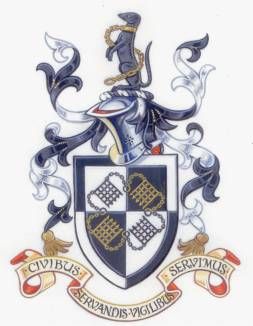 Arms: Quarterly Argent and Sable four Portcullises in saltire points inwards the chains linked by four Annulets in cross all in the Argent Sable and all in the Sable Or a Bordure quarterly Sable and Argent.
Crest: Upon a Helm with a Wreath Argent and Sable A Meerkat sejant erect Sable gorged with a Collar attached thereto a Chain reflexed over the back Or.

The arms were officially granted on September 19, 2008.