From Heraldry of the World
Your site history : National arms of Seychelles
Jump to navigation Jump to search

THE NATIONAL ARMS OF THE SEYCHELLES 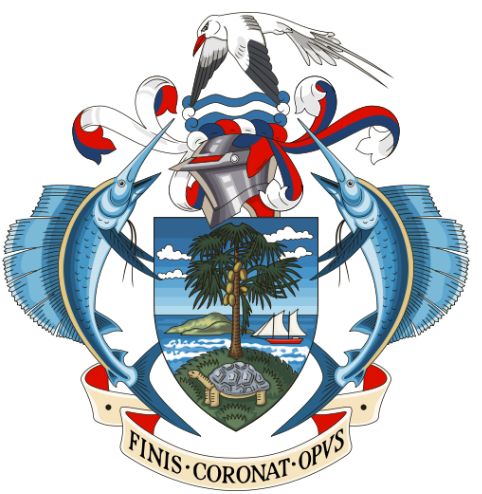 Arms : Azure, a Female Coco de Mer Palm (Lodoicea maldivica) issuant from in base a grassy mount thereon a Giant Tortoise (Testudo gigantea) the whole in front of water rising therefrom to the dexter an Island and sailing thereon a two-masted Schooner in full sail all proper.
Crest: Upon a Wreath Azure, Or, Gules, Argent and Vert above water barry wavy Azure and Argent a White Tailed Tropic Bird (Phaethon lepturus lepturus) volant proper.
Supporters: On either side a Sail Fish (Istiophorus gladius) proper.
Motto: FINIS CORONAT OPUS

The arms show a landscape with a giant tortoise and a coconut tree in front, a blue sea, island and ship in the back and clouds in the sky.

The crest is a flying White-tailed Tropicbird (Phaethon lepturus). The supporters are two white sailfish. The whole shows the island and its typical wildlife on land (tortoise), air (bird) and sea (fish).

The motto "Finis Coronat Opus" is Latin for "The End Crowns the Work".

The composition was derived from the earlier badge of the then Colony of the Seychelles, used from 1961-1977. This badge was already earlier in use as a less official emblem, as can be seen from the Abadie image below.