From Heraldry of the World
Your site history : Naumburg (Hessen)
Jump to navigation Jump to search 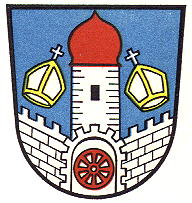 Naumburg was founded as a castle by the Counts of Naumburg in 1200 and grew into a town, which received city rights in 1230. The oldest seal dates from around 1270. The seal shows a tower behind a city wall and on each side of the tower a head, one wearing a mitre. The two heads symbolised the rulers of the city, the Counts on Naumburg and the Archbishops of Mainz.

In 1284 the Archbishop became the only ruler and promptly the second head was also shown with a mitre. In the city wall a gate appeared with the wheel, the symbol of the State of Mainz. Later the heads were removed and the composition was placed in a shield to form the present arms.