From Heraldry of the World
Your site history : Nauru
Jump to navigation Jump to search

There are 14 districts in the Republic of Nauru. Each one consists of a number of traditional villages, many of which are uninhabited or destroyed nowadays.

None of the districts or villages does use arms, neither does the capital Yaren.

The National Arms of Nauru 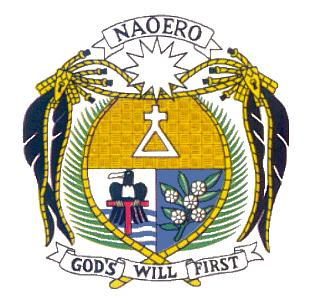 The upper half of the arms show the alchemic symbol of phosphorous, as phosphorous mining has been the main economic activity during the 20th century. The lower half shows a frigate bird and a local Tomano flower. Both indicate the nature of the island. The arms are surrounded by two coconut palm leaves and symbols used by local Chiefs. The cross above the shield is derived from the flag.

The motto is God's Will First.