From Heraldry of the World
Your site history : Ndola
Jump to navigation Jump to search 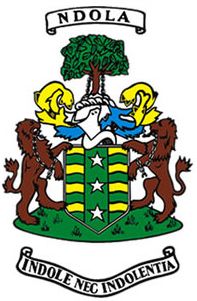 The green vertical pale represents the tropical vegetation which surrounds Ndola, and the three gold mullets represent the three principal groups into which the residents of Ndola can be divided - commerce and industry, the civil ser­vice and the railways.They also recall that the town was originally divided into three wards.

On either side of the green pale are wavy blue bars symbolising rivers as symbolic for Ndola's situation on the watershed between the rivers running north to the Congo River and south to the Zambesi River.

The gold portion of the shield represents the wealth derived from copper mining and upon which the town depends.

The wild fig tree forming the crest is a representation of the 'slave tree' still existing in Ndola, but the ahains of slavery have been wrenched loose by the two lions which support the shield. The illustration is thus that the advent of British rule - symbolised by the lions - eliminated slavery from the area.

The motto is Indole nec Indolentia, but was not described in the letters patent.