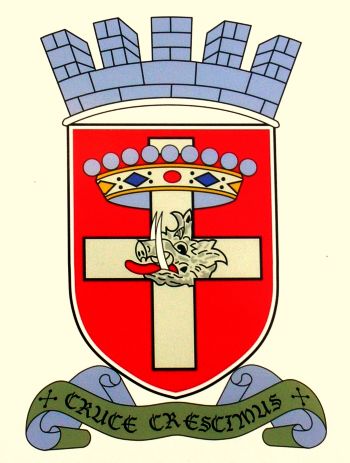 Gules, a [long] cross couped and reversed, charged with a boar's head erased, and encircled in chief with a viscount's coronet of sixteen pearls all Proper.

Above the Shield is placed a mural coronet and in an Escrol below the Shield this Motto "Cruce Crescimus".

New Galloway was created a Royal Burgh by King Charles I in 1630.

The arms are something of a mystery, though it is known that they are based on the device on the old Burgh seal, but without the crest and supporters, since the Town Council did not wish to have them. The boar's head and the Viscount's coronet evidently commemorate Sir John Gordon of Lochinvar, 1st Viscount Kenmure, on whose lands the Burgh was established and who was himself involved in its foundation.

The explanation of the red field and silver cross can only be the subject of conjecture. There seems to be no local connection with St. Peter to explain the cross reversed, and it therefore appears reasonable to suggest that, as the original site for the Burgh was St. John's Clachan of Dalry, the cross may have some reference to the Knights of St. John who bore "Gules, a cross Argent".

The use of the Latin motto - "By the Cross we prosper"­ would seem to support the view that the cross is that of the Knights of St. John.