From Heraldry of the World
Your site history : New York (state)
Jump to navigation Jump to search 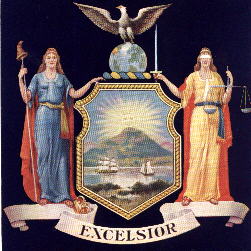 Arms : Azure, in a landscape, the sun in fess, rising in splendor or, behind a range of three mountains, the middle one the highest; in base a ship and sloop under sail, passing and about to meet on a river, bordered below by a grassy shore fringed with shrubs, all proper. Crest. On a wreath azure and or, an American eagle proper, rising to the dexter from a two-thirds of a globe terrestrial, showing the north Atlantic ocean with outlines of its shores.
Supporters. On a quasi compartment formed by the extension of the scroll. Dexter. The figure of Liberty proper, her hair disheveled and decorated with pearls, vested azure, sandaled gules, about the waist a cincture or, fringed gules, a mantle of the last depending from the shoulders behind to the feet, in the dexter hand a staff ensigned with a Phrygian cap or, the sinister arm embowed, the hand supporting the shield at the dexter chief point, a royal crown by her sinister foot dejected. Sinister. The figure of Justice proper, her hair disheveled and decorated with pearls, vested or, about the waist a cincture azure, fringed gules, sandaled and mantled as Liberty, bound about the eyes with a fillet proper, in the dexter hand a straight sword hilted or, erect, resting on the sinister chief point of the shield, the sinister arm embowed, holding before her her scales proper.
Motto. On a scroll below the shield argent, in sable, Excelsior.