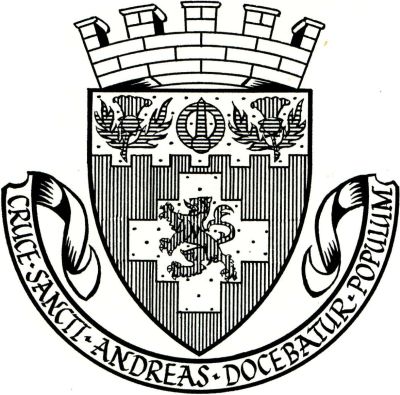 Gules, on a cross quadrate [couped] Or, a lion rampant of the field, armed and langued Azure; on a chief embattled of the Second a round buckle between two thistles of the Third, flowered of the First.

Above the Shield is placed a coronet appro­ priate to a Burgh, and in an Escrol below the same this Motto "Cruce Sancti Andreas Docebatur Populum".

Newburgh was granted as a Burgh to the Abbot of Lindores by King Alexander III in 1266 and was, in 1600, raised to a Burgh of Regality in favour of Patrick Leslie, later Lord Lindores, son of the 5th Earl of Rothes. In 1631, King Charles I created the town a Royal Burgh.

The arms repeat several of the features on the old Burgh seal. They use the red and gold colours of Macduff, Earl of Fife. The couped cross quadrate with its lion rampant represents the famous and ancient Cross Macduff, situated near to the Burgh, and of which the base still remains; the Cross formed the sanctuary of the Clan Macduff.

The blue colour of the thistles and the buckle in the chief recall the Leslie connection, the thistle being part of an augmentation granted by King Charles I to Alexander Leslie, 1st Earl of Leven, the noted Covenanting General. The battlements refer to the castle in the arms of the Lordship of Lindores.

The Latin motto "By the Cross of St. Andrew were the people taught" is intended to be a shortened version of the motto of Lindores Abbey which was "Biduo Pendens in Cruce Beatus Andreas Docebat Populum". Unfortunately something went wrong with the Latin in the process and the motto granted contains two grammatical errors, "Andreas" should be "Andreae" and "Populum" should be "Populus".