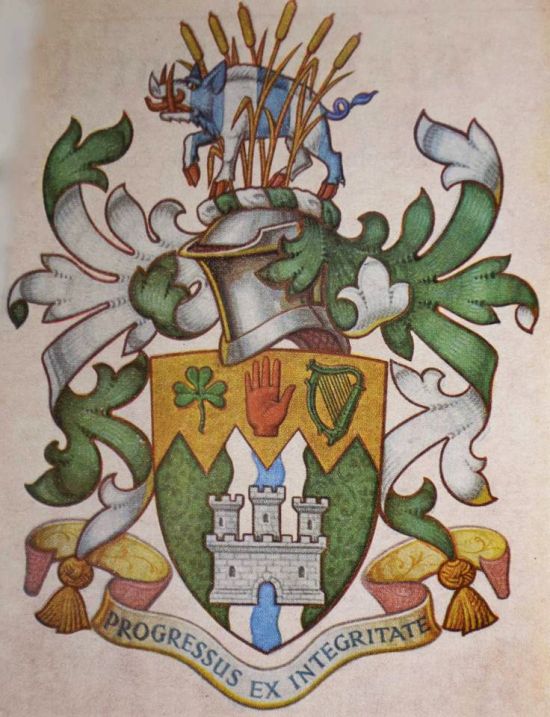 Arms: Vert, a pale wavy argent, thereon a pallet wavy azure surmounted of a castle triple-towered argent; on a chief daneetty Or between a trefoil and a harp vert a dexter hand appaume couped at the wrist gules.
Crest: On a wreath of the colours, Between six bulrushes, three and three, leaved and fructed Or, a boar passant paly of six argent and azure, armed and unguled gules.

The arms were officially granted on September 1, 1965.

The shield shows tooth-like peaks which represent the mountains, and against a background of the Shimna River a three-towered castle representing the ancient stronghold of the Maginess family which once stood almost on the exact site of the present Annesley Mansions.

The golden chief, representing the golden sands of Newcastle, is the Red Hand of Ulster, and a Harp for Ireland (the harp also has some connotation with Percy French, author of the song 'Where the Mountains of Mourne Sweep down to the Sea').

The boar in the crest is taken from the arms of the Maginess family, the ancient landlords of Iveagh. On each side of the boar are three bulrushes, these indicate the Shimna River (Shimna means r iver of the bulrushes).

The motto in Latin reads 'Progressus ex integritate'- or 'progress with integnty',or 'progress arising from integrity'.