From Heraldry of the World
Your site history : Newport (Wales)
Jump to navigation Jump to search 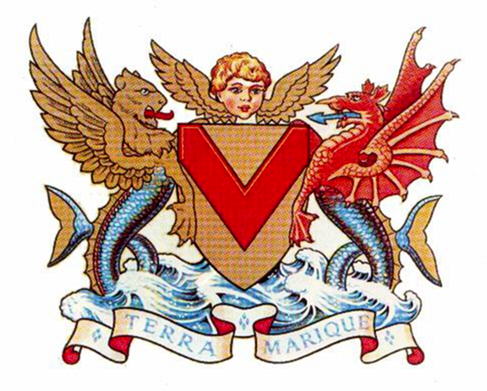 Arms : Or a Chevron reversed Gules; the shield ensigned by a Cherub proper.
Supporters : On the dexter side a Winged Sea Lion Or and on the sinister side a Sea Dragon Gules the nether parts of both proper finned Gold.
Motto: 'TERRA MARIQUE' - By land and sea.

Newport's Coat of Arms is unusual for two reasons. Firstly, it places a cherub above the shield of arms; secondly, one of the supporters is a winged sea lion - Newport was the first authority to use this rare heraldic device. In 1929 Newport obtained a grant to use the armorial bearings which, in fact, it had already been using for some time - certainly since 1835. This is a gold shield with a red chevron in reverse; the shield is ensigned by a cherub. The shield is that of the Staffords, Earls and Dukes of Buckingham, lords of the Manor of Newport in the 14th and 15th centuries - but the reversed chevron marks the difference between these Borough Arms and those of the family.

In 1957 it was decided to petition the Earl Marshal for the supporters which all Boroughs are entitled to possess. A year later the College of Arms granted this request and a winged sea dragon and a winged sea lion were brought into use. These supporters represent strength on land, sea and in the air. The motto 'Terra Marique' was adopted at the same time and means 'By land and sea'.