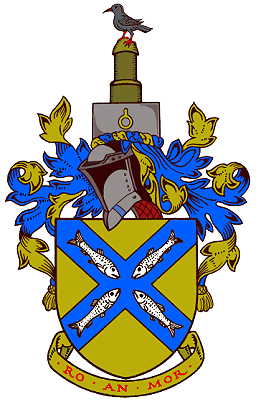 Arms : Or on a Saltire Azure four Herrings respectant Argent.
Crest :On a Wreath of the Colours upon a Block of Granite ringed a Bollard perched thereon a Cornish Chough all proper.
Motto: 'RO AN MOR' - Gift of the sea.

The herrings represent the fishing industry, the granite block stands for local stone, the bollard alludes to the harbour, and the Cornish chough is the County emblem. The motto is in the Cornish language.