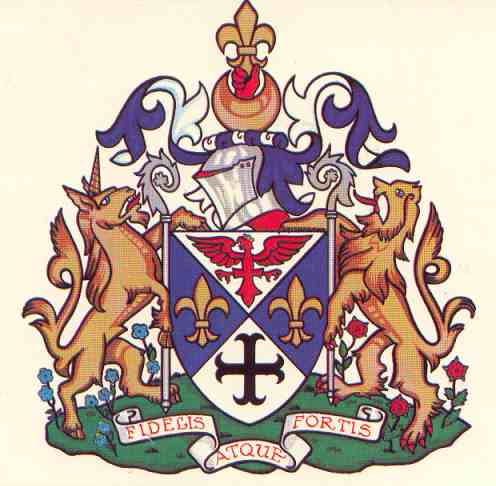 Arms : Per saltire argent and azure, in chief an eagle displayed gules, crowned Or, in fesse two fleurs-de-lys of the last, and in base a cross moline sable.
Crest : On a wreath of the colours, Within and issuant from a crescent Or a dexter hand gules grasping a fleur-de-lys gold.
Supporters : On the dexter side a unicorn and on the sinister side a lion Or, each supporting a pastoral staf sable.
Motto: Fidelis atque fortis.

The shield is parted diagonally in the shape of St. Andrew's cross and what is popularly known as St. Patrick's cross. This partition alludes to the Scottish origin of the Montgomerys also to the Charter of 1613 granted to the Town of Newtownards by King James I. The emblems are taken from the arms of the families who have held Newtownards the main town of the area.

The eagle is that of the de Courcys who invaded Ulster in the twelfth century. John de Courcy built the castle round which Newtownards developed.

The fleurs-de-lis on blue are from the shield of the Montgomerys, Earls of Mount-Alexander; Sir Hugh Montgomery came into the Newtownards Priory property in 1608, and Newtown House descended from them to the Colvilles, whose black mill-rind cross occupies the base of the shield.

Above the shield is the closed helm proper to Civic Heraldry, decorated with the crest-wreath and flowing mantling or cloak in the livery colours of the arms, blue and white. Upon this is the Montgomery crest, with the hand coloured red in allusion to the familiar Red Hand of Ulster.

The supporters are a unicorn and a lion of gold. These have a Royal flavour in allusion to the Charter of 1613; the unicorn was brought into the Royal Arms by King James. Each supporter, however, has another significance-the unicorn is akin to the supporters of the arms of the modern de Courcys, and the lion is the sinister supporter of the arms of the Marquesses of Londonderry, who have been so long associated with the history and development of Newtownards. The beasts support crosiers in allusion to the two monastic foundations associated with the town- Movilia Abbey, said to have been founded by St. Finian in 540, and the Priory founded by Walter de Burgh in the thirteenth century. The crosiers are black, the predominant colour of the habit of the Augustinians and Dominicans to which these foundations respectively belonged. The grassy bank on which the supporters stand has flax flowers and roses growing from it in reference to two industries for which the area has been well known -linen weaving and floriculture.

The motto Fidelis atque Fortis (Faithful and Brave) is adapted from that of the Savages of Portaferry, one of the most ancient of Ulster families.