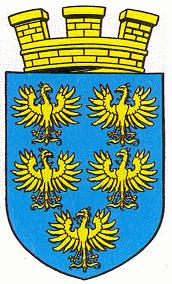 The arms were officially granted in 1920.

Niederösterreich was created as a Duchy in 1156 and became part of Austria in 1282. Around 1450 a large part, now mainly Oberosterreich, was removed from the Duchy.

The arms with the five eagles first appears in 1335, as the legendary arms of the H. Leopold, who originated from the area. Around 1360 Duke Rudolf IV adopted the eagles as the arms of Old Austria. Ever since the arms represented Niederösterreich in the ducal and imperial arms.