From Heraldry of the World
Your site history : Niederrodenbach
Jump to navigation Jump to search 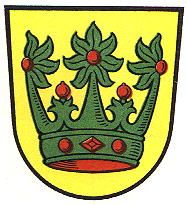 The arms are based on a seal dating from the middle of the 18th century. The seal already showed a crown, and was the seal of the Bücherthal, of which Niederrodenbach was the main village. The origin of the crown as a village symbol is not known. The colours are taken from the arms of the Counts of Hanau, who owned the area.