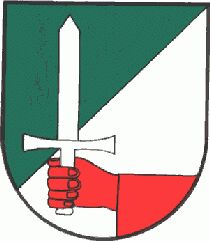 The main charge is the so-called "Freiung", the historical symbol of the rights and liberties of a market borough. This hand holding a sword is still put up on the market-place at appropriately festive occasions. As it was the Sovereign's prerogative to grant the rights of cities and boroughs (well, originally), the hand symbolised the King (or in Austria, the Holy Roman Emperor).