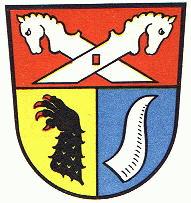 The largest part of the district historically belonged to the County of Hoya until 1582. This is symbolised by the bear's claw, taken from the Hoya arms. The horn in the lower left part is derived from the arms of the Counts of Wölpe (see als Neustadt am Rübenberge), who also played a major role in the history of the district. The chief shows two horse heads, a typical decoration on the farms in the district.