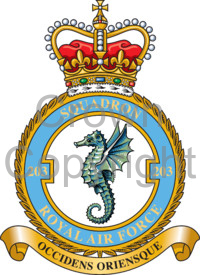 When stationed in the Persian Gulf the Personnel of the Squadron noticed many Seahorses on the beach and adopted this design as a Badge. The Motto translates as "West and East". The badge was granted in February 1937.