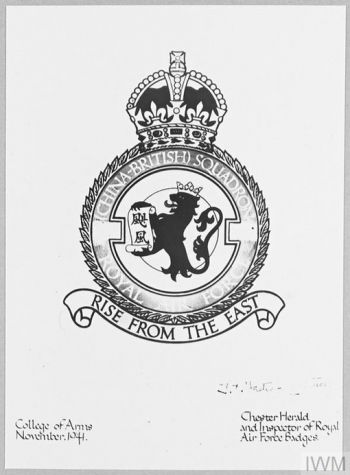 In front of a besant a demi-lion erased gules, crowned Or, holding in the paws a scroll argent inscribed in Chinese characters "CHU FENG".
Motto: Rise from the East.

The Squadron was a gift from the British Community in China and their Friends and was located in the South West of England. The Besant symbolises cornwall and the Lion Devon. The Donors are symbolises by the Scroll whith the Chinese Wording translated as "Fierce Wind". The badge was granted in Novermber 1941.