History: Formed at Valley in October 1941. 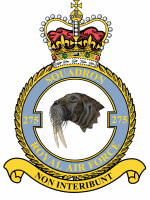 The Squadron carried out air-sea rescue operations flying Walrus Aircraft. The Motto translates as "They shall not perish". The badge was granted in February 1945.

© since 1995, Heraldry of the World, Ralf Hartemink . Information from Knights of the Sky Part Five by B.R. Holliss and R. Symons.