History: Raised at Hove in November 1916. 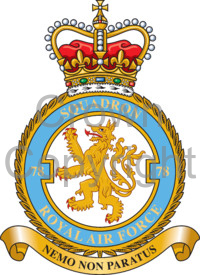 The Tiger double queued symbolise that the Squadron was at one time equipped with Whitley IV Aircraft with twin Rudders and two Tiger Engines. The Motto translates as "Nobody unprepared". The badge was granted in November 1939.