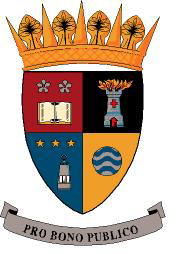 Quarterly: 1st, Gules, in chief two cinquefoils pierced Argent, and in base a book expanded Proper, binding and fore-edges Or; 2nd, Sable, a tower Argent, masoned Sable, window and port Gules, from the battlements flames issuant Proper; 3rd, Azure, in chief three mullets Or and in base a miner's lamp Argent; 4th Or, a fountain.

Above the Shield is placed a Coronet appropriate to a statutory Area Council, videlicet:- issuant from a circlet eight paling piles (three and two halves visible) Or and eight garbs (four visible) of the Last, banded Sable, and in an Escrol below the same this Motto "Pro Bono Publico".

The motto "Pro bono publico" means 'For the public good'.